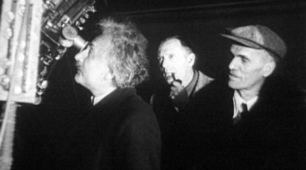 Physicist explored the idea of a steady-state Universe in 1931.

The Big Bang theory had found observational support in the 1920s, when US astronomer Edwin Hubble and others discovered that distant galaxies are moving away and that space itself is expanding. This seemed to imply that, in the past, the contents of the observable Universe had been a very dense and hot ‘primordial broth’.

But, from the late 1940s, Hoyle argued that space could be expanding eternally and keeping a roughly constant density. It could do this by continually adding new matter, with elementary particles spontaneously popping up from space, Hoyle said. Particles would then coalesce to form galaxies and stars, and these would appear at just the right rate to take up the extra room created by the expansion of space. Hoyle’s Universe was always infinite, so its size did not change as it expanded. It was in a ‘steady state’.

The newly uncovered document shows that Einstein had described essentially the same idea much earlier. “For the density to remain constant new particles of matter must be continually formed,” he writes. The manuscript is thought to have been produced during a trip to California in 1931 — in part because it was written on American note paper.

It had been stored in plain sight at the Albert Einstein Archives in Jerusalem — and is freely available to view on its website — but had been mistakenly classified as a first draft of another Einstein paper. Cormac O’Raifeartaigh, a physicist at the Waterford Institute of Technology in Ireland, says that he “almost fell out of his chair” when he realized what the manuscript was about. He and his collaborators have posted their findings, together with an English translation of Einstein’s original German manuscript, on the arXiv preprint server (C. O’Raifeartaigh et al. Preprint at http://arxiv.org/abs/1402.0132; 2014) and have submitted their paper to the European Physical Journal.

“This finding confirms that Hoyle was not a crank,” says study co-author Simon Mitton, a science historian at the University of Cambridge, UK, who wrote the 2005 biography Fred Hoyle: A Life in Science. The mere fact that Einstein had toyed with a steady-state model could have lent Hoyle more credibility as he engaged the physics community in a debate on the subject. “If only Hoyle had known, he would certainly have used it to punch his opponents,” O’Raifeartaigh says.

Although Hoyle’s model was eventually ruled out by astronomical observations, it was at least mathematically consistent, tweaking the equations of Einstein’s general theory of relativity to provide a possible mechanism for the spontaneous generation of matter. Einstein’s unpublished manuscript suggests that, at first, he believed that such a mechanism could arise from his original theory without modification. But then he realized that he had made a mistake in his calculations, O’Raifeartaigh and his team suggest. When he corrected it — crossing out a number with a pen of a different colour — he probably decided that the idea would not work and set it aside.

Helge Kragh: “What the manuscript shows is that although by then he accepted the expansion of space, [Einstein] was unhappy with a Universe changing in time”